It's hard to believe that my baby is seven already! It seems like she was just a tiny baby not that long ago and now she's a big first grader and turning 7. I always through growing up that adults were being dramatic about how quickly we were growing up, on the other end now, I get it. Time passes by so quickly and you never get it back. 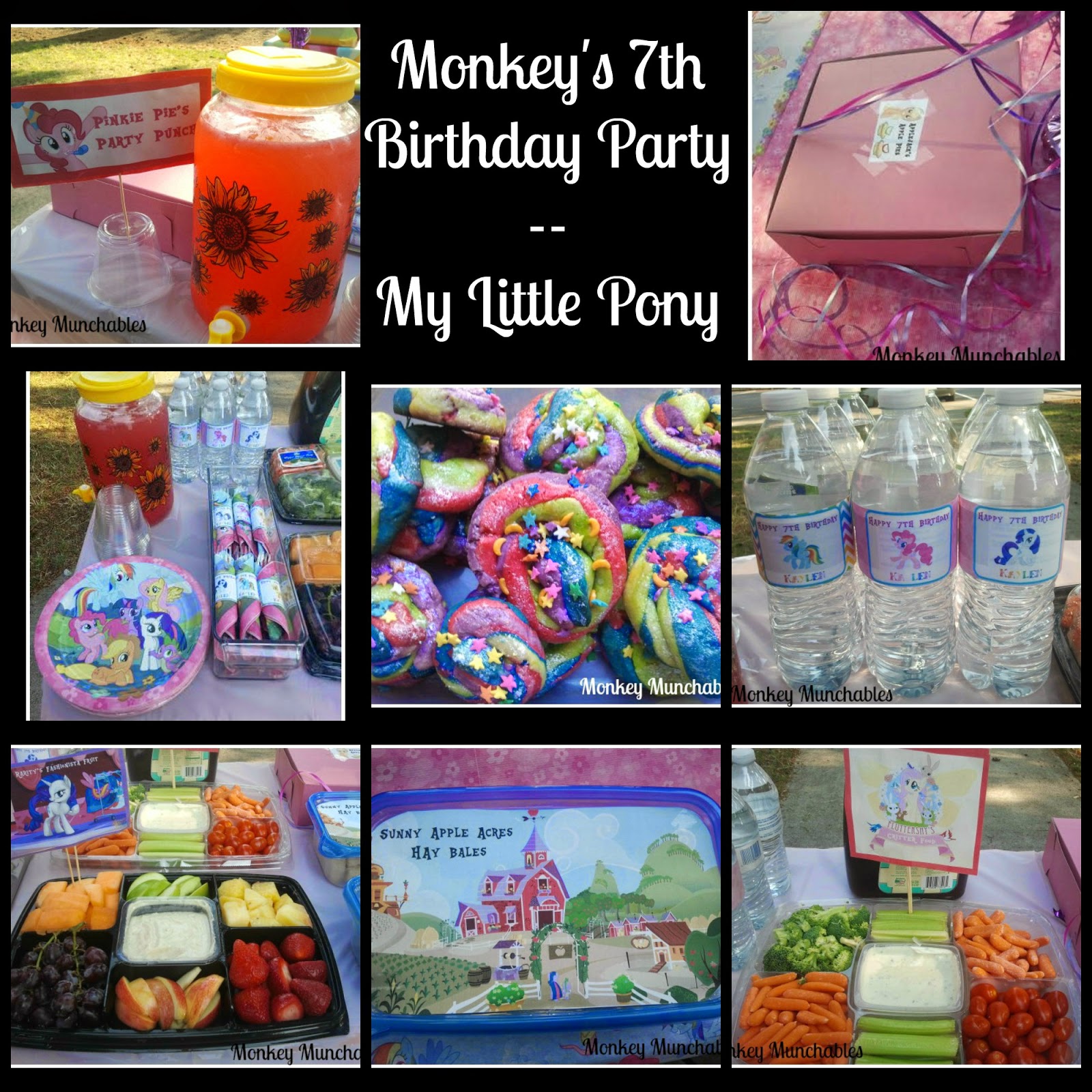 This year Monkey asked for a My Little Pony party. It is one of her all time favorite things and she is constantly dragging out the bin of ponies to play with! It's one of the few things she hasn't grown tired of. So, when she picked out that party theme I was happy. I knew she'd stick with it and that I would have plenty of material to work with. First stop was food!

First on the menu was Pegasus Poop Cookies (if you've seen unicorn poop recipes it's the same). They took a bit more time than I usually like devoting to projects because I don't consider myself particularly crafty. However, I LOVE how they came out. I got the recipe HERE. The neon package of dye I had only came with four colors so we did that. It was really concerned it was too dark but once I got the luster dust on there, it looked great. I'll warn you the link I gave to where I got the recipe uses "Disco Dust" yes you can buy that at cake supply stores but from everything I have read it's intended to be for crafts and showpieces. Disco dust on the label says for craft projects whereas luster dust says FDA Edible. So I'd just be mindful of that if you decide to make it and not use Disco Dust. Here is my final product! 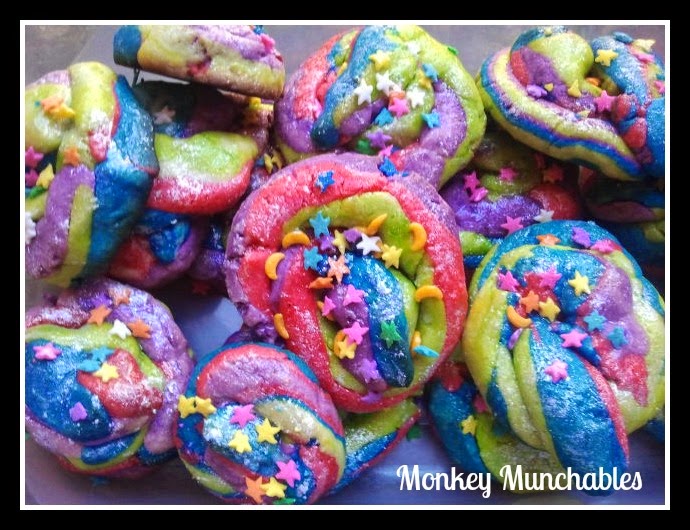 And of course because we were going to be having this party at a park they were going to need a container. I opted for my tried and true Ziploc and printed off a label for the box. 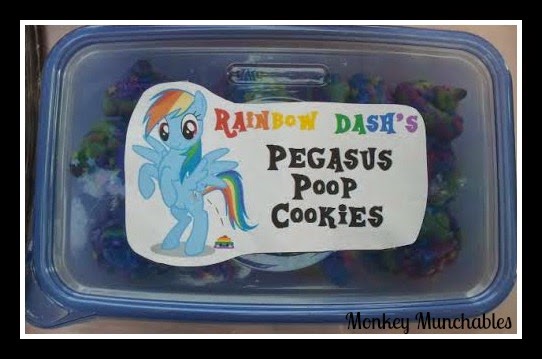 Everyone was nervous to try the cookies but after the first person who took one (and declared they were yummy!) then the others followed suit. Afterwards though you end up with pretty glittery fingers which people were calling the ''mark of shame'' for eating poo. LOL. Glad my bunch had a sense of humor about it all. In case you were curious, here's what the inside looks like. Also as to the recipe I added 1 1/2 tsp of orange oil to the recipe link above (instead of lemon or vanilla that it calls for). 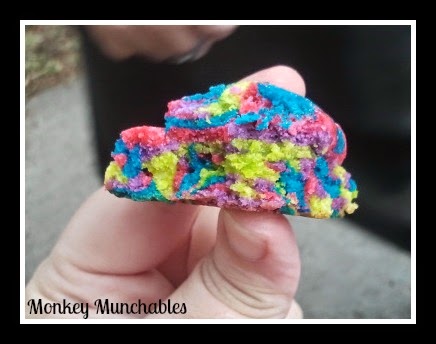 This year I decided to print labels for napkin rings and water bottles (it was supposed to get up into the 90's!) 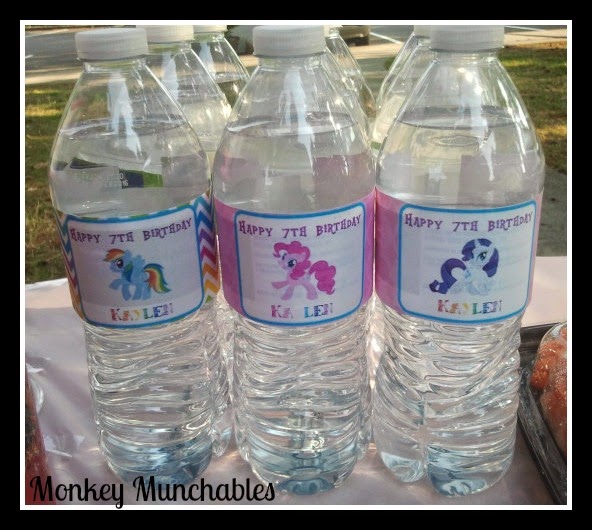 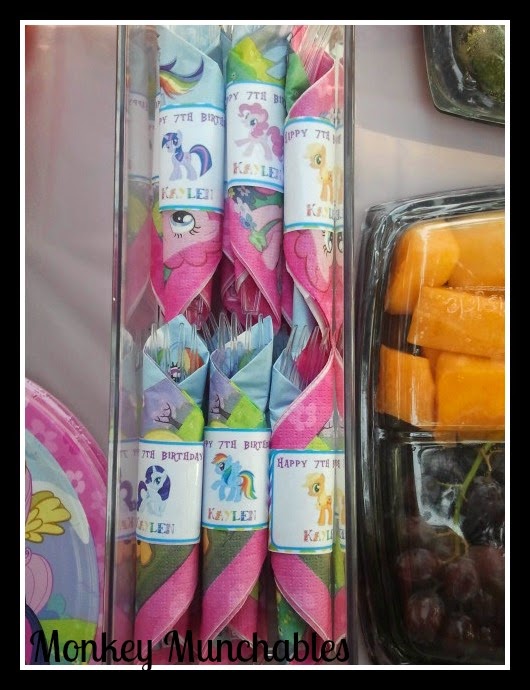 Both say "Happy 7th Birthday" and then her name at the bottom. I used the same rings for both, I just cut down the arms on them for the napkins.

Just in case there were people that weren't brave enough to try out the Pegasus Poop we went ahead and brought Hay Bales which were Rice Krispies treats. They were kept in a Ziploc box just like the cookies were. 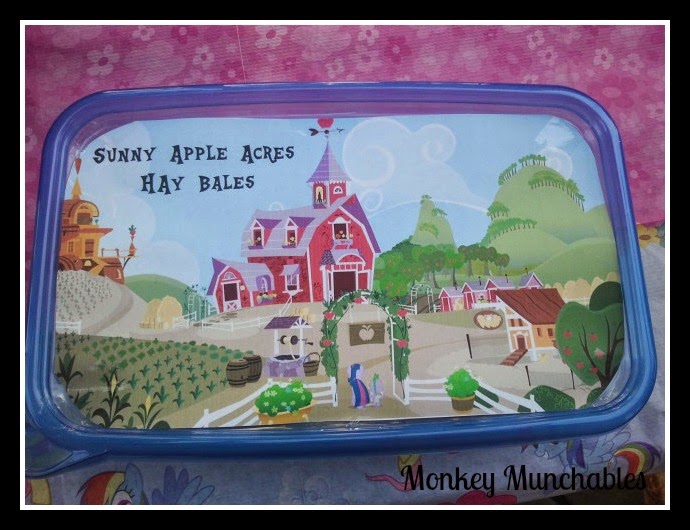 I found a large image of Sunny Apple Acres the family farm of Apple Jack (a primary character) and simply used the paint program to add the text, and print! I tried to round the edges so that it would fit the top of the Ziploc container. 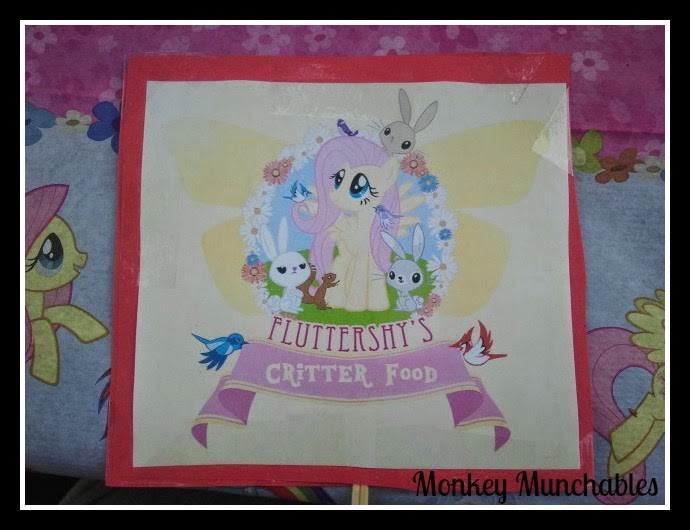 Here is a close-up of our Veggie Tray sign. 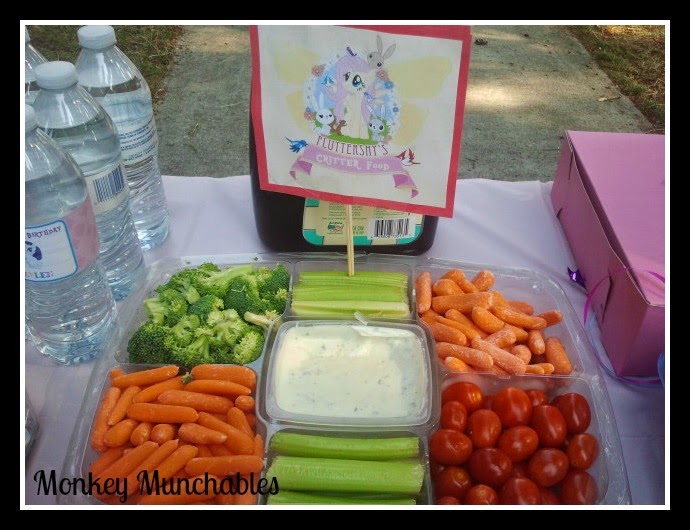 To accompany Fluttershy's Critter Food we also had to bring in Rarity's Fashionista Fruit! 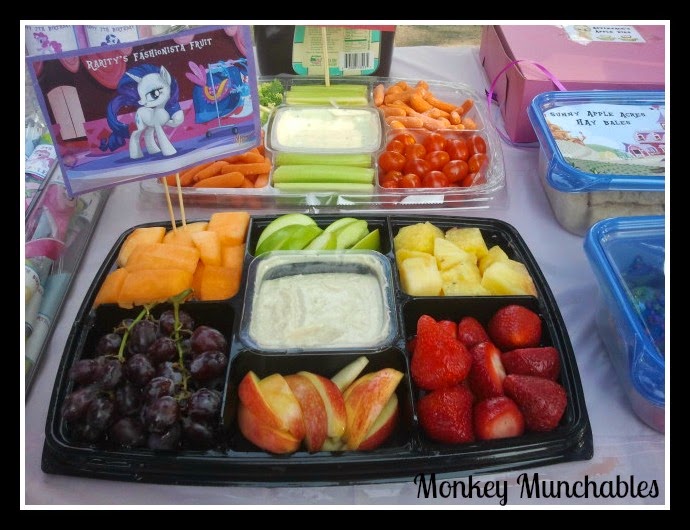 Here's what the rest of the food half (the other half was for presents) looked like. 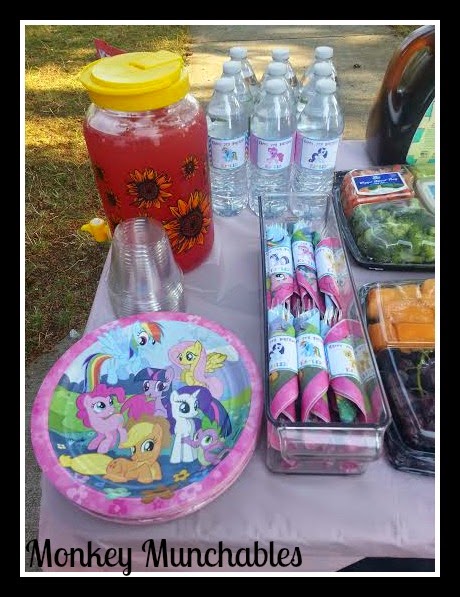 And our two tables we showed up before 9 am to stake out before the other people got there! 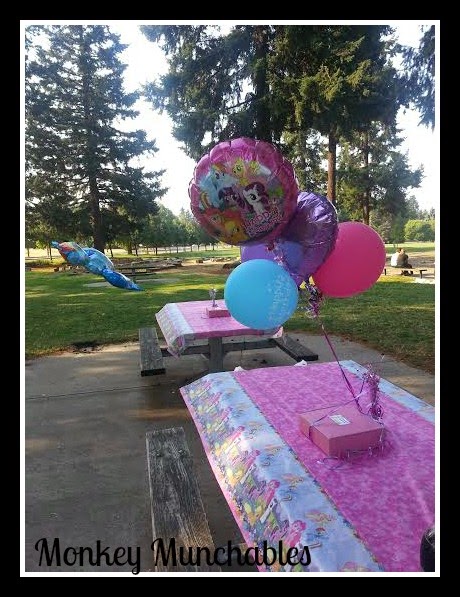 Each table had a My Little Pony table cloth, balloons, and it's own pink box which had an Apple Pie inside. This year my daughter decided to forgo the traditional cake for a apple pies. I totally appreciate the commitment to theme since Apple Jack is known for making apple pies! Each box got it's own label that says, "Apple Jack's Apple Pie". I didn't get a good shot at the party, but I'll include what I printed. 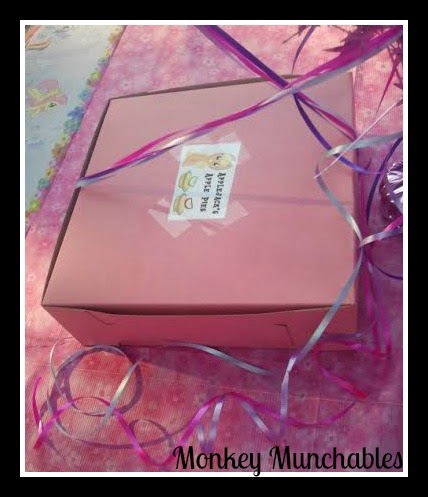 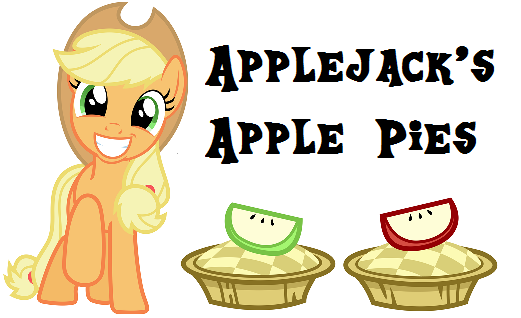 Aside from the water you already saw we had a couple drink options. One was a jug of lemon tea and then there was Pinkie Pie's Party Punch. The lighting in this picture makes the punch look orange but it was in fact very very pink! We used Pink Lemonade concentrate (one reconstituted with water, one not) and most of a 2 liter of lemon lime soda. We used my Sun Tea jar to help keep the bees and other undesirables away. 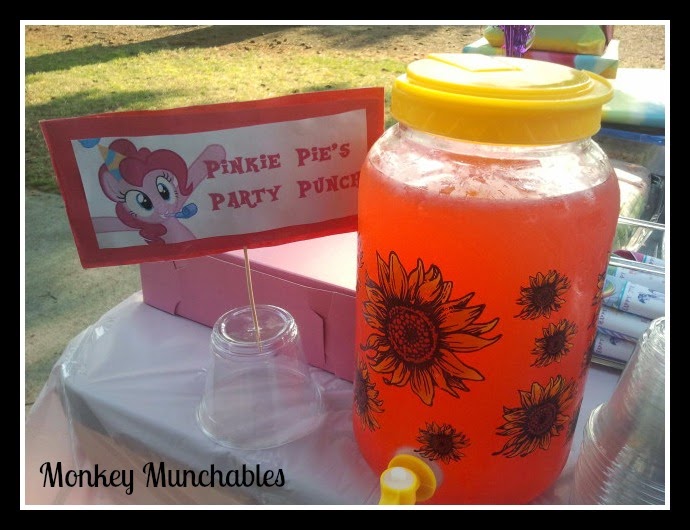 At the end of it all Monkey had a fantastic time! Her grandparents brought her to the party so she got to see everything once it was already set up and she was soooo excited! She flitted around noticing all the little details and thought the labels on the water and napkins were super cool. And of course, she made out like a bandit in the gifts! 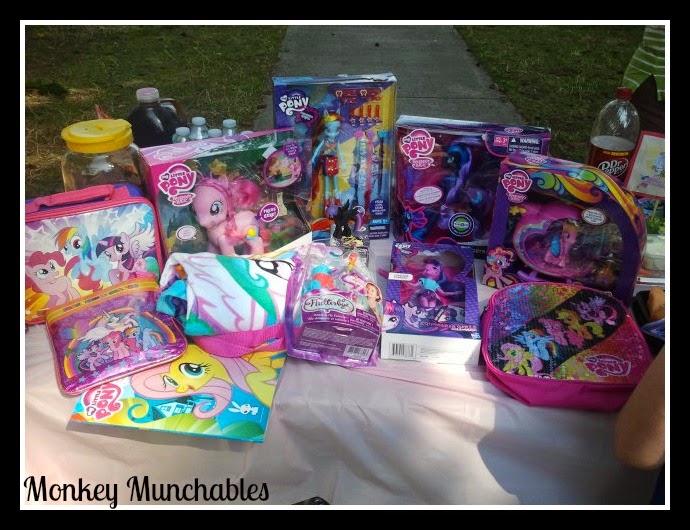 I know I don't usually post about my parties but I hope that you enjoyed getting to see Monkey's 7th birthday! I really enjoy planning kids themed parties and making Monkey happy (especially on her birthday).

Thank you for leaving your thoughts, ideas, questions and comments! I appreciate any feedback!

Tara @ Monkey Munchables
I'm a super busy mom like many of you. I have 2 kids, Monkey (7) & Clarissa (6m). For me this is all about healthier snacks, packing lunches, sharing ideas for meals, dressing up food, making my own baby food and going through so many of life's changes from a mom really living the process. 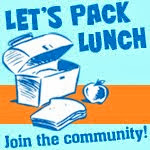 Blogs I Go Bananas For!